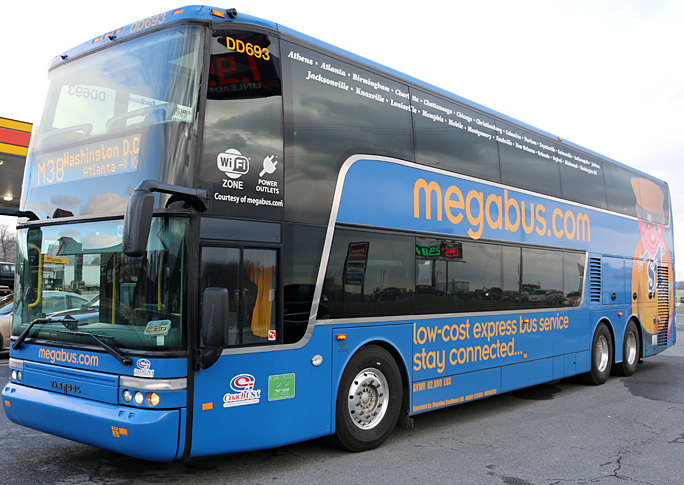 T he new schedule was just released by Megabus in the United States — and fares for as low as one dollar are still available as of “press time” for this article through Tuesday, March 14, 2017; but those fares tend to go fast.

Yes, you read that correctly: one dollar fares on Megabus are available — but you have to hurry if you want to book them.

The last time the new schedule was released was August 17, 2016; but that included the schedule through Monday, January 9, 2017 — and releasing a new schedule so soon after the most recent release is unusual for Megabus.

Even if the one dollar fares disappear, there are still low fares available which could be attractive to you if you do not have a problem traveling on a bus to your destination. You can even use it for positioning yourself to a distant airport where you may have obtained a low airfare.

If you purchase a one dollar return fare — that is, round-trip — it will cost you a minimum of five dollars. The booking fee and the facilities fee each cost $1.50; so at three dollars, the fees cost more than the entire trip.

Some trips only have a booking fee of $2.00 for the entire trip — meaning that the round-trip could cost you a minimum of four dollars.

As I originally wrote in this article, I am not sure I would use Megabus again, as it does not have the best customer service; and the ride can be long and draining depending on where you go — especially when there is a significant delay. The report of my first trip as a passenger on Megabus was recently posted as well. Regardless, I am hoping that this notice could help to save you money, if you are so inclined.

My advice is to take an overnight trip — especially if you are able to sleep on the bus. This way, you do not lose time in which you could be doing something else. I had not had luck accessing the Internet via the Wi-Fi which is supposed to be available aboard each bus; but your experience may vary.