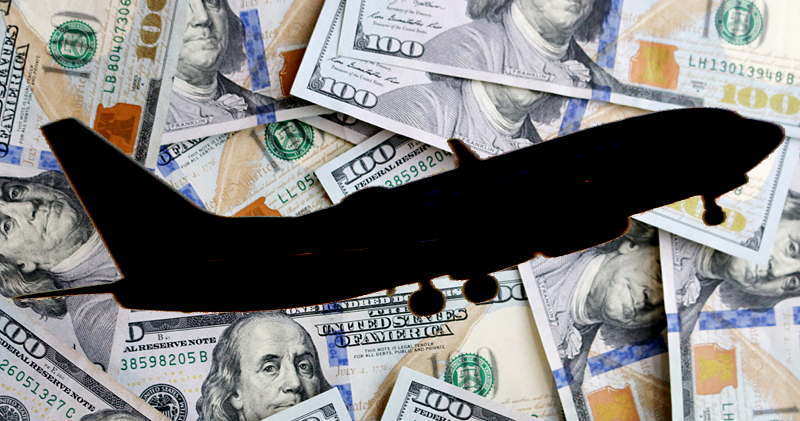 The Passenger Facility Charge is a tax with which up to $4.50 per flight segment can be charged by airports to passengers to help finance infrastructure projects — including the expansion of terminals; the improvement of security checkpoints; the reduction of airport noise; and the renovation and upgrading of washrooms and toilets — which are funded by the federal government of the United States…

…but if the Transportation, Housing and Urban Development Appropriations Subcommittee has its way, that tax will almost double to $8.50 in order to fund infrastructure projects to improve airports across the United States.

“Airline passengers already pay over $20 billion a year in taxes for the tickets they purchase”, said Nicholas E. Calio — who is the president and chief executive officer of Airlines for America, which is a trade group for the commercial aviation industry in the United States — in this article. “Adding another $3.2 billion tax hike on American travelers simply cannot be justified. The truth of the matter is that airports are flush with cash. It is disingenuous at best for Congress to repeatedly saddle traveling families and businesses with tax-hike after tax-hike while airports are sitting on billions in unused funds. Congress has access to over $7 billion in unobligated tax revenue sitting idle in the aviation trust fund that could be used instead of raising taxes. Choosing to increase this tax is a completely unnecessary poke in the eye and wallet of air travelers. We urge Senators on both sides of the aisle to stand with the 2.4 million people who fly every day by sending a message that tax hikes simply won’t fly.”

An official statement was released from Delta Air Lines, which is no longer a member of Airlines for America as of last year:

“Delta strongly opposes the proposal by the Transportation, Housing and Urban Development Appropriations Subcommittee to raise the Passenger Facilities Charge (PFC) from $4.50 to $8.50 for departing flights. A record $3.6 billion in airport PFC taxes is already forecast to be collected this year; an additional tax increase is not only unnecessary but also harmful. Studies by the U.S. Government Accountability Office repeatedly conclude that for every $1 increase in the PFC, passenger demand declines by more than 1 percent. Delta has invested more than $7 billion in airport projects in the last decade, and it will invest an additional $12 billion in the years ahead. Other major U.S. carriers are making significant investments of their own. In light of these and other resources already available to airports, hard-working Americans should not have to abide another tax increase on their plane tickets.”

The proposed increase in the Passenger Facility Charge is not new, as efforts to implement it have been occurring for at least 2.5 years. Grover G. Norquist — who is the president of Americans for Tax Reform, which is an advocacy group on behalf of taxpayers in the United States — sent this letter back on Thursday, March 26, 2015 to members of the House of Representatives in opposition of the proposed increase: “According to 2013 financial reports filed with the FAA, US airports had almost $11.4 billion in unrestricted cash and investments on hand. This equates to 357 days of liquidity. In addition, the Airport and Airway Trust fund is at its highest level since 2001, boasting an uncommitted balance of $6 billion.”

In Support of the Increase of the Passenger Facility Charge

Not surprisingly, the Airports Council International – North America supports the increase. “With so many politically divisive issues plaguing Washington, it is refreshing to see the Senate Appropriations Committee putting words into action through a bipartisan effort to modernize America’s aging airport infrastructure. Today’s action by the committee is as pro-air passenger as you can get, benefiting passengers traveling through airports of all sizes across America with updated facilities, lower airfares, shorter security lines, and more airline competition”, said Kevin M. Burke — who is the president and chief executive officer of the advocacy group on behalf of airports — according to this official statement. “Airports applaud the strong leadership and political courage of Senate Appropriations Committee Chairman Thad Cochran (R-MS), Vice-Chairman Patrick Leahy (D-VT), THUD Subcommittee Chairman Susan Collins (R-ME), and Ranking Member Jack Reed (D-RI) for working across the aisle and understanding that a modern and competitive airport system works for passengers and communities through increased economic opportunities, lower airfares, and a better passenger experience.”

Airports are not the only entities which support the increase. “The PFC is imposed by airports on departing flights and the revenues are used for infrastructure improvements at the airport where the fee is collected. While the PFC is a local charge, it has been capped by federal law at $4.50 per originating ticket since 2000”, according to this article written by Dean Franks, who is the vice president of congressional affairs for the American Road & Transportation Builders Association. “The Senate’s FY 2018 transportation funding measure would provide $44.2 billion for the highway program—a $900 million increase—and $12.1 billion for the transit program—$285 million less than the FY 2017 level. Included in the bill’s public transportation funding is $2.1 billion for the Capital Investment Grant Program, which supports transit construction projects. The Trump administration had requested only $1.2 billion for the program and proposed limiting the funds to only projects that had a full funding grant agreement with the Federal Transit Administration. The Senate proposal, however, would fund existing agreements and all those expected to enter agreements in 2018, but is $170 million less than was authorized by the FAST Act.”

Call me skeptical; but I do not believe I will receive a full return on my investment in paying more taxes to fund airport and highway construction. However, that is due to my own mistrust that the federal government will properly and appropriately allocate the funds to where they are intended to go…

…and besides, I do not believe that the airport experience is all that great now — even with newer airports and terminals which have already been constructed in recent years. Concourse F at the international airport which serves the greater Atlanta metropolitan area never did impress me — I visited it during its construction — and when I used it for the first time after the conclusion of an international flight upon returning from Europe earlier this year, my experience was less than stellar. I intend to document both my experience — as well as photographs of Concourse F while it was under construction — in future articles.

In the meantime, I suppose that someone has to fund the design of airports — which purportedly includes subliminal ways to part you from your money anyway…

…but I am willing to keep an open mind; so I will defer to you: would you pay a minimum of an extra $17.00 in taxes per round-trip airline ticket to fund improvement projects for airports, highways and bridges across the United States?