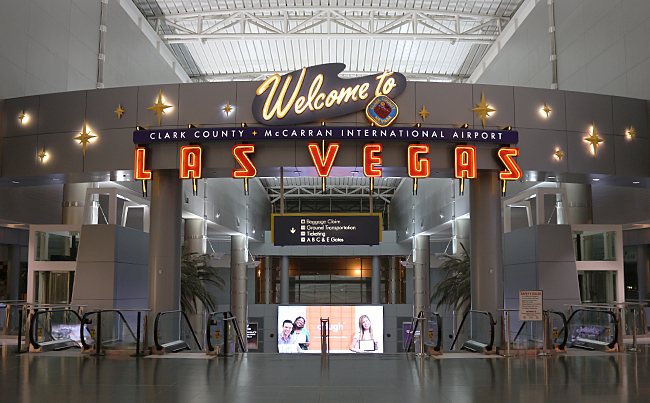 Resort Fees; Then Parking Fees: Are Free Drinks in Las Vegas In Jeopardy?

“V egas resorts casinos have steadily increased the amount of revenue they receive from dining and shows over the years, becoming less reliant on gambling revenue. But, it’s still a large part of what they do. Taking away free parking is one thing (something MGM Resorts did last year). Reducing free drinks strikes me as a much more aggressive cost-cutting measure.”

Resort Fees; Then Parking Fees: Are Free Drinks in Las Vegas In Jeopardy?

Although I neither gamble nor consume alcoholic beverages, I generally agree with Edward Pizzarello of Pizza in Motion pertaining to this article of whether or not free drinks are coming to an end at casinos in Las Vegas due to a concept of gambling to drink, which applies only to those patrons who play video poker at certain bars…

…but when Las Vegas comes to mind, the first weblog of which I think is TravelZork, where I found this article written by Marc Meltzer, who tested a complimentary drink monitoring system not long after it was first implemented at the Tag Sports Bar in Caesars Palace. Both Caesars Entertainment and MGM Resorts International have been experimenting with technology which allows them to track how much money people are spending on casino games. The idea is to serve drinks to gamblers based on how much they spend on playing the games at the casinos.

“The Caesars drink monitoring system seems like an easier threshold to reach than the MGM Resorts International drink monitoring system being tested at The Mirage Lobby Bar. If my math is correct (remember I’m bad at math), you only have to play 50 hands and of video poker at Caesars bars to receive a complimentary drink. That works out to $62.50 coin-in played for each drink. The Caesars comp drink system takes less than half of the 120 hands and $150 coin-in the comp drinks ‘cost’ at The Mirage.”

Marc Meltzer basically concludes that “the threshold for complimentary drinks isn’t difficult with either system. However, with Caesars Entertainment’s system it seems easier to get a ‘free’ drink. It’s easy to let play slip if you’re with friends. People don’t visit Las Vegas to think and that’s probably the real problem with these drink monitoring systems.”

However, that conclusion is of no solace to readers who posted mostly negative comments to his article with sentiments ranging from how the Las Vegas Strip has become “one gigantic gouge” to wondering why even bother visiting Las Vegas anymore — especially when the free drinks supposedly differentiated Las Vegas from other gambling destinations.

The first question which came to my mind is that are alcoholic beverages — or drinks in general — so expensive that the casinos are forced to implement measures to recoup the money they lose? Is this concept nothing more than another “money grab” of sorts?

I had little reason to return to Las Vegas even when parking was free; mandatory resort fees were less expensive or nonexistent; and having to keep track of how much you gamble in order to figure out whether or not you qualify for a complimentary drink.

On the extremely rare opportunity where I do gamble — the last time was years ago — I would not mind having a complimentary soft drink or juice; but I was not exactly so thirsty that I would have paid for one right there on the spot. This leads me to wonder how many people — especially those who do not otherwise gamble or drink alcoholic beverages — would change their minds about visiting Las Vegas…

…but then again, I am not the target audience for Las Vegas. I suppose the argument of rewarding “high rollers” — versus those people like me who Las Vegas would not miss anyway — is the reasoning behind this latest concept…

…and you can bet — literally, in this case — that if this concept is proven to be successful, then look for it to spread similarly to the implementation of parking fees and mandatory resort fees in Las Vegas.