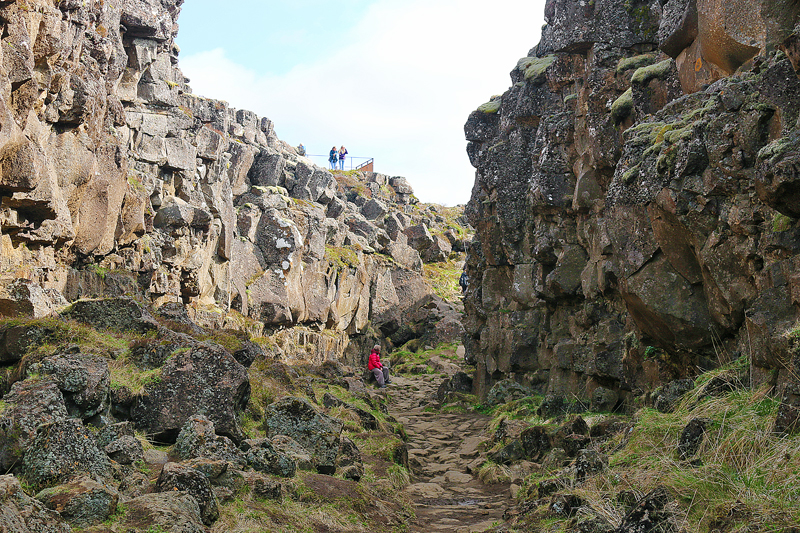 The Walk of Death: Langistígur in Þingvellir National Park in Iceland

On what turned out to be a rather warm and sunny day in Þingvellir National Park — which is part of the popular Golden Circle of Iceland — I wonder how such a naturally beautiful area could have once been the scene of something so gruesome that its nickname is either The Walk of Death or Execution Trail.

The Walk of Death: Langistígur in Þingvellir National Park in Iceland

Game of Thrones is one of the movies in which scenes were filmed in this canyon of sorts, which is known as Langistígur.

The nickname of this path is either The Walk of Death or Execution Trail because this is where men were beheaded and hanged; while women either drowned or were burned to death nearby as a result of the harsh justice system of Iceland called Jónsbók, which was introduced from Norway back in the year 1281…

…but the mid-seventeenth century is when capital punishment became more frequent when Stóridómur — which is also known as the Great Edict, which was a series of laws demanding harsh physical punishment — became effective.

Incest and adultery were two of the activities which were perceived as immoral enough to warrant the death penalty, which became especially common due to the growing influence of the church.

The hiking trail of lava rocks led to four spots where people were either drowned, burned alive, hanged or decapitated, as executions usually occurred at Þingvellir.

The path between the fissure walls is comprised of lava rock, which can be covered with mud during a rainstorm.

This logo on a railing is comprised of the Icelandic letter Þ four times. It is pronounced with a th sound; so the national park is sometimes called Thingvellir.

…as well as spectacular views.

The view from the top in Langistígur is located in the northeastern part of Þingvellir National Park; and this view of the path is facing southwest.

I was fortunate to have visited Þingvellir National Park at a time in the morning when not many visitors were there at the same time as me; but by the time I left the park, an influx of visitors from tour buses began to flood the park.

Notice the scale of the few people in the photograph when compared to the landscape around them — especially the height of the walls.

Langistígur will treat you to breathtaking views of a mountain called Botnssulur.

Langistígur is located in Þingvellir National Park off of highway 36 — which is also known as Þingvallavegur — approximately 47 kilometers northeast of the city center of Reykjavík. Driving time is approximately 47 minutes each way.

Facilities are located at the visitor center at the main entrance to Þingvellir National Park to enjoy Langistígur. You can technically stay as long as you like, as it is technically open 24 hours per day, 365 days per year. Give yourself a minimum of 45 minutes to enjoy the natural beauty of Langistígur. The path should be easy to negotiate for most visitors; but an incline to the view via a trail comprised of lava rocks can be difficult for some people with health issues.

Entrance to Þingvellir National Park — of which Langistígur is a part — is actually free of charge; but if you arrive by motor vehicle and park in the following parking lots…

P1 Hakid: By the visitor centre at Hakid next to the viewpoint at the upper end of Almannagjá.
P2 Fossplan: At two parking lots near the assembly fields and Öxarárfoss.
P5 Valhöll: To the south of the assembly site.

…then the charge for a daypass on all the parking lots — at which the ticket is valid for the day at all parking lots; and the parking pay machines accept all major credit card and debit cards — is as follows: