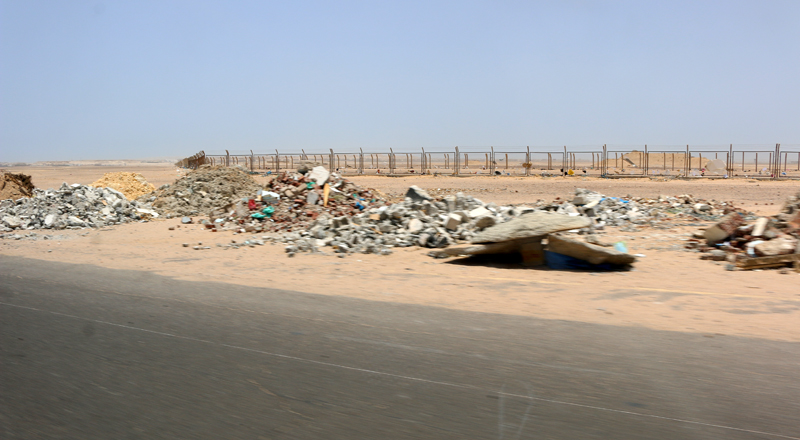 H amatto — who was an employee of the Hilton Luxor Resort & Spa when I checked out of the hotel property and was part of giving me arguably the best service I have ever received from the staff at a hotel property — asked if I knew the desert route out of town to get to the road to Safaga to avoid going through Qena.

“I tried to take that route on the way into Luxor; but the police at the checkpoint told me I could not take that road and instructed me to turn around.”

Follow me?!? I could not believe this: I must have followed him for at least another five kilometers to a point where he said that all I have to do is take the first left after the security checkpoint; and I will be on the open road on the desert route bypassing Qena to the highway to Safaga — and sure enough, that is exactly what eventually happened.

That aforementioned stretch of road is part of the Luxor-Al-Hurghada Road in Egypt, which stretches along approximately 294 kilometers and takes greater than four hours and thirty minutes to drive.

This video claims that the following roads are 10 roads on which you would never want to drive:

My Experience on Luxor-al-Hurghada Road — and Its Alternate Route

On my way from Hurghada to Luxor, I was forced by officers at a checkpoint to go straight to Qena rather than take the desert route of the highway. The most miserable part was having to drive through the city of Qena — which is not along Luxor-al-Hurghada Road and was choked with cars and pedestrians — and then turn left to go south along Highway 75 which hugged the eastern bank of the Nile River, fraught with an agonizing number of speed bumps, roadblocks and checkpoints with armed police, and pedestrians with carts dragged slowly by horses or mules. All of those impediments added a significant amount of time to the journey of greater than 67 kilometers — over which greater than 90 minutes elapsed but felt like 19 hours.

Between Hurghada and just east of Qena — and then again along what is known as the aforementioned desert route — much of the terrain is remote mountains and desert with an occasional stalwart tree dotting the landscape. Workers have been working on a brand-new four-lane divided highway between Hurghada and Qena — a small portion of it has already been completed — which should eventually reduce travel time between the two cities.

Technically, the drive in the vast remote areas of the desert was easy when compared to driving in Hurghada and Luxor and especially Qena and Cairo…

Why Luxor-al-Hurghada Road is So Dangerous

…but I had no idea of the potential dangers for which this route is known.

According to this article from Dangerous Roads:

The road that links the ancient city of Luxor in southern Egypt and Hurghada, the regional hub for several scuba diving resorts on the Red Sea, is a death trap. It’s extremely dangerous with many head-on collisions and fatal accidents due to drivers not turning on their head lights. The reason for drivers keeping their lights off is because bandits and terrorists patrol the roads and shoot at drivers.

On this road between these 2 touristic centers, bandits, terrorist attempts to undermine the tourism industry, and frightened drivers have all combined to turn this asphalted road into a major nightmare. The violent attacks along this road are dangerous enough by themselves. And if the bandits don’t get you, the terrorists probably will. On 17 November 1997, six gunmen from the Islamic group Jihad Talaat al-Fath, shot and killed 62 German tourists in Luxor in a massacre that resulted in a massive government crackdown that endures today.

The experience of using this road is very impressive. What sometimes makes the road even worse is the fact that most people who drive at night don’t use headlights for fear of announcing their approach. Yes, it could be a great way to avoid unseen enemies, but it also invites other disasters in the form of head-on collisions. In Egypt, most of the drivers never turn on their headlights after the sun goes down, setting the stage for the high accident fatality rate that has earned the road a spot on this list. At night, drivers speed across the dusty desert with their headlights off, setting the stage for head-on collisions. Ironically, the only thing more dangerous than driving on the Luxor-Hurghada Road at night with your headlights off is driving at night with them on. Bandits, brigands and even terrorists patrol the road in the darkness in search of easy prey. Invisibility might save you from one threat, but there’s a good chance it will deliver you into the hands of another. Consider buying some of those night vision goggles if you plan to drive this road after dark.

…but I have driven on some roads around the world which seemed to be more dangerous to me than Luxor-al-Hurghada Road — such as in Lesotho as one example, where there were no guard rails to protect motorists against dropping off the side of a mountain.

Yes, that is yet another trip report about which I need to write — and I appreciate your patience…

Garbage and construction refuse is strewn all along the side of the road near Hurghada. Photograph ©2015 by Brian Cohen.