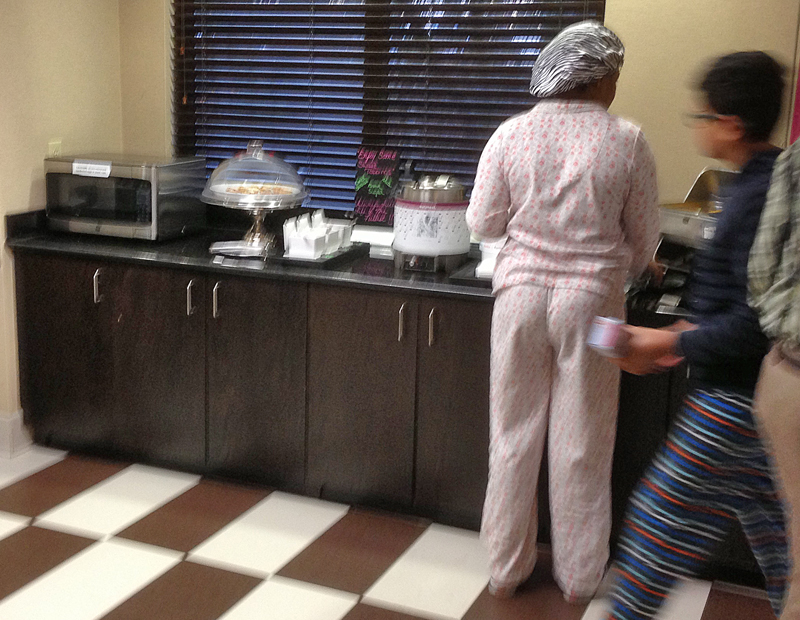 Would You Wear Pajamas and a Shower Cap To Breakfast at a Hotel? This Woman Did

When I asked whether or not bathrobes and slippers have become a new travel fashion statement in this article which I wrote 15 days ago, I did not place the same spotlight on pajamas and shower caps…

Would You Wear Pajamas and a Shower Cap To Breakfast at a Hotel? This Woman Did

…and during the hours of breakfast at a hotel property which offers it daily free of charge to guests, I recently spotted a woman who wore pajamas and a large shower cap — perhaps to hide hair rollers — helping herself to the food and beverages which were offered.

No one else was dressed in a similar fashion that morning.

So as not to embarrass her — or anyone else, for that matter — I attempted to take the photograph at an opportune moment.

I had mixed thoughts about the sighting. Wearing pajamas and a shower cap seems to be improper attire in public; but then again, she was most likely comfortable and saved time by not having to change clothes — and no inappropriate part of her body was exposed…

…so prior to writing this article, I showed the photograph to some people to get their reactions. I did not ask any questions — rather, I simply asked them to look at the photograph.

“How can anyone do that?” asked one person who was astonished and immediately acknowledged that he would never show up at breakfast at a hotel property wearing pajamas and a shower cap.

“She is not wearing underpants,” said one woman. “You would see panty lines through those pajama bottoms if she did; and her pajama pants bottoms would not be clinging into her crack.”