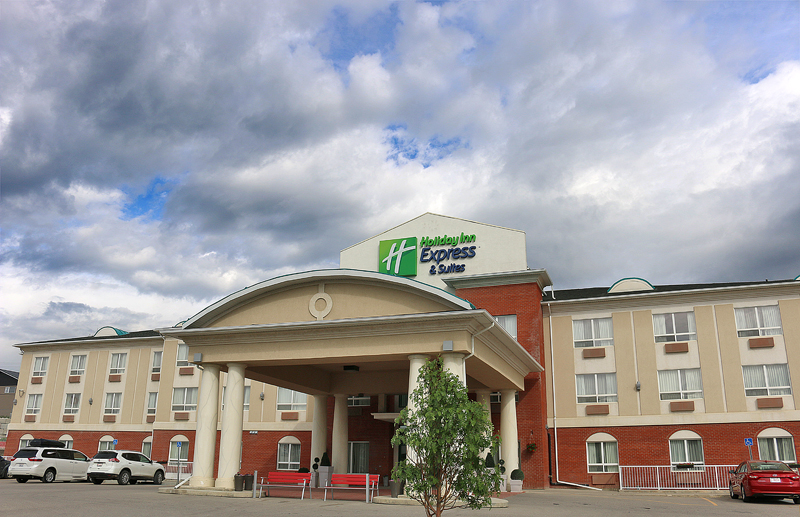 T here are relatively few lodging options within Banff National Park and Jasper National Park which offer the combination of decent accommodations at a reasonably good value — and are also available with vacancies — which is why I bracketed my visit to the Rocky Mountains in Canada with stays at the Hampton Inn & Suites By Hilton Calgary — University Northwest and the Holiday Inn Express & Suites Hinton hotel properties.

I spent one night between those stays with a stay at the Delta Hotels Banff Royal Canadian Lodge, which I found overpriced and underwhelming.

I first walked into the lobby area of the hotel property late at night, which was rather dark. The woman behind the front desk who checked me in was quite friendly and helpful, as she was the person who volunteered the information to me pertaining to this special offer of 1,000 bonus IHG Rewards Club points.

Available in the lobby was a bowl of apples and oranges; as well as two large containers of cold water — one of which was flavored with sliced lemons.

There is a couch where you can wait in case there is a line; but checking in was quick and easy. I received my room keys and proceeded to the elevator.

There were two double beds in the room. The bed was comfortable.

A telephone, alarm clock and lamp are situated on the nightstand between the two beds.

At the foot of the bed are the other furnishings included in the room: a desk, a dresser, and a chair.

A flat-screen television was on the dresser; and next to the dresser was a chair. I thought that the mirror above the chair was hung on the wall in a strange place — especially with a small part of the dresser blocking it.

A refrigerator, microwave oven and coffee maker were available for use in a kitchenette of sorts, which included a working sink and cabinet space. The desk was equipped with a telephone, plenty of electrical outlets, two lamps, and a way to connect a laptop computer to the Internet. That last item was not necessary, as Wi-Fi access to the Internet worked well.

The closet near the entrance to the room — which had no door — included an iron, an ironing board, hangers, an extra pillow, a bench on which you can either sit or place luggage, and a plastic laundry bag.

The bathroom was well-lit and typical in both size and features — the mirror was large but the sink was small — and on the left side of the door upon walking into it is an electric blow dryer.

An ample amount of towels was available on a shelf and rack above the toilet; and the shower and tub had a handle bar to assist with access and egress. A bar of soap was placed on the towel for the floor.

I already wrote in this article about what may have been the worst view I have ever seen from a hotel room.

Does this view not compel you to take that special someone and get in a romantic mood? Hey — at least a bit of blue sky managed to peek through the clouds in this otherwise dreary photograph.

This is literally the end of the line, as indicated by the railroad tracks which simply end. The weeds accentuate the white containers scattered in the background and help the wall in the foreground achieve prominence as probably the best part of this view.

I normally attempt to photograph views without the artifacts caused by the reflection in the window — but in this case, not only did I not care; but perhaps the view of piles of junk in front of a blue shed is actually improved.

The area at which to eat breakfast in the morning has a nice fireplace; but the temperature was too warm for it to be lit. A flat-screen television is built into the wall above the fireplace; and it can be adjusted.

The drink machine contained orange juice, lemonade, apple juice and cold water. I did not care for the orange juice, as it tasted too “fake” — so I ate some oranges instead. To the left of the drink machine is a machine which dispenses two pancakes in a minute after simply pressing a button; and on top of the pancake machine are small packets of syrup and butter.

The pancakes were decent and hot. I prefer the waffles offered at Hampton Inns — such as this one where I arguably enjoyed the best breakfast ever at a Hampton Inn hotel property.

Hot proteins were available to eat with the pancakes — including pork sausage, turkey sausage, scrambled eggs, and cheese omelets. I skipped this station.

A vast assortment of hot and cold cereals were available — along with various toppings — as well as bananas, apples and oranges.

A refrigerator was dedicated to dairy items — including assorted individual cups of yogurt and milk. A tray of hard-boiled eggs — which were already peeled — were located in a plastic tray on the center shelf of the refrigerator.

I did not eat any of the slices of bread, assorted bagels and assorted muffins — which were wrapped in plastic wrap — simply because they did not appeal to me. Next to the bread selection are packets of assorted jellies, butter, cream cheese, spreadable cheese, ketchup, and other condiments. The toaster — one of two available — is capable of toasting four slices of bread simultaneously.

The other toaster is located near the display for cinnamon rolls.

The cinnamon rolls did not appeal to me either; so I skipped them.

A choice of different coffees, teas, hot water, cups with lids, and accompaniments — such as creamer and sugar — were available at the hot liquid station. I do not drink coffee or tea; so this did not appeal to me either.

I actually stayed at this hotel property twice: once I paid for the stay with a credit card; the other time, I redeemed 25,000 IHG Rewards Club points because the final bill would have been almost $200.00 Canadian.

As is customary with Holiday Inn Express hotel properties, you can ask the person behind the front desk for free items you may have forgotten at home — such as shaving cream, a razor, toothpaste or a toothbrush as four examples. This is similar to the policy of Hampton Inns.

Although the food at breakfast did not appeal to me for the most part, there was nothing wrong with it either. More options were available than I expected; and breakfast is included in the room rate.

The location of this hotel property is not all that convenient. It is located 81.1 kilometers away from the town of Jasper; and extensive road construction on Trans-Canada Highway 16 within Jasper National Park significantly extended what should have been a travel time of slightly greater than an hour. At least much of the drive is scenic — unlike the actual town of Hinton itself.

I had no problems or issues with my stay, which cost me a total of $168.68 — or $125.38 in United States dollars — including tax. Although I recommend staying at this hotel property for a reasonably comfortable, quiet, clean and basic stay which is near fuel stations, some retail shopping and fast food chain restaurants, I actually prefer the Hampton Inn & Suites By Hilton Calgary — University Northwest, which was too far away from the places I wanted to visit.